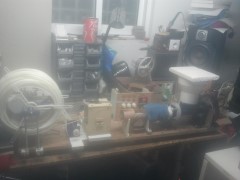 And yes, it is time to make my own filament extruder!! I already have spend too much money for buying this so useful material to print with my reprap pursa mndel 2.  I can only say, that spending  cost is 1/10  less ,instead of making your own filament!!!! And yes, it deserve making one of these. I spent around 200 Euros for making these. In this price included feedstock . Material is ABS plastic and 25 Kgr, costs 70 euros. Instead, with 70 euros you can oooooooonly buy 2 kilos ready to use filament extrude!!!!!!!!!!!!!!!!!!!!!!!!!!!!!!!!!!!!I will do my best to help make your own extrude, i will feed you ,with all useful information to manage it. We are going to discus about adjusting this ,because you have to understand that it is a very big capital also.

First, it is very important own a 3d printer or have  access to it ,so that can print things you are going to need.I try different designs ,but doesn’t work all ,just because we can not dare laws of physics

For example,the following picture design ,does not work ,because all power is accumulated at the red circle that i have mark

I tried to to hold the pipe from rolling, screwing 4 threated rods holding the hopper, but nothing neither it doesn’t work.

Then ,next wrong it did, i tried to keep some distance from gear to the face of the motor, placing 3 washers so that there is enough place for the chain. The result was, washer ,touch between gear and face motor be forced to operate normally

I fix those two problems and I have done some more mods. Motor gear was 15 teeth,i change it to 12, Auger gear was 32 I change it to 40 . Now, motor has to turn more quickly ,but i have more power. Air after filament exit,is veeery critical. Look at the next video.https://www.youtube.com/watch?v=jHkA0CAJeQU&feature=youtu.beSo, i make those tunnel at the next video that seems to working good. Next problem now is hopper.When pellets are in hopper and is hearing that characteristic sound that pellets starts brokes, there is big problem. The problem is that at the exact time that auder break pellets, speed is not the same because it slow down juuuuust a little,but the same time stretch motor continues pull up filament with the same speed and that point filament is thinner. Thinner i mean from 2.8 , it is 2.5. I don’t like this, i am trying to solve this problem now. One solution could be to speed up motor and with a reduction gear ,auger obtain more power. But no money, so some ideas would be usefull.https://www.youtube.com/watch?v=QkhDE_g_O2Q&feature=youtu.be

Now with bigger Augergear and smaller motor gear ,voltage raised up from 3.8 to 5.2. It is very very good because motor can operate with more torque  power.

Now let’s move to hopper. After tests i see that hopper has big enough diameter and feeding all this with pellets, sometimes pellets stuck between auger and motor slow down. So it would a good idea to feed just a small part of the hopper

What i mean is here, pellet are only at small right side area

It was veery good idea , but i should somehow control the amount of the pellets that was falling in the hoper . So , i finally i add a motor around 4 RPM with angle axle that jab slow enough pellets inside.

And now let’s move to the other capital part, no else than filament stretcher

It supposed to be more difficult, but it really wasy and it works at the first time without problems

Just look the photos below ,everything seem clearly . Rollers are taken of a drum of laser printer. That’s the perfect size and rubber on it is best.

There are some testing videos while experiment

It is almost done!! i have include tunnel with a fan for air freezing filament .
Also i have done a bigger hooper

This is my first completed full spool filament, it is from 2.6mm to 2.9mm. Average weight is 3 kilos. It last around 12 hours

You can see all this final video

Almost a year later, I made a big modification. I abolish chain and replace with belts and pulleys.Now filament is smoother and motor is working at 7.5 volt instead 5.2 volt with chain, so it has more power and it is not get warm. I add also a fuse button 5 amps on the big motor , in case something goes wrong .Take a look below

Take a closer look at pulleys.I start it from 2 belts i found in a very old photocopy machine.Japan quality, in a very good condition.I start the plan from deciding the reduction.

I have all plans and stl file,but i think it is useless to upload, because you will not find exactly the same belts as i did, but consider it as EVERYTHING CAN BE DONE from the beginning.

And party is continued!

After some months i decide ,i have to make a new way to spool filament,more equable and especially, a spooler that is independent with filament stretcher  ,so that filament is more accurate ,more sure and without any problem.

It consist of a  worm screw that it moves the spooler with a adjustable pwm circuit for motor. Ratio of worm screw is as many grinders has the big gear.In my occasion it is 1/30

One more mod. i add ,is a  Helix Looper that can spool uniformly filament. This is a fabrication of rwgresearch.com, that you can down load below and find many information

And a stand for caliper ,that you can find to the same site

You can a video in action with new spooller

I use it also for spool reel to each other

You can download eagle files for making pcb to control 2 motor with pwm.Motors are 12V.

Nothing is critical ,mine electronics and mechanics  is just my point of view ,you can make everything with your own way!

I have also all .stl files for gears,motor base etc, you can ask everything you need to download, i am willing  to help everyone

This site uses Akismet to reduce spam. Learn how your comment data is processed.