I am going into the point immediately.The proper way to control dimming 230v AC, is through phase control with a Triac: the Triac then is fully opened, but only during a part of the sinus AC wave.

One could let an Arduino just open the Triac for a number of microseconds, but that has the problem that it is unpredictable during what part of the sinus wave the triac opens and therefore the dimming level is unpredictable. One needs a reference point in the sinus wave.
For that a zero crossing detector is necessary. This is a circuit that tells the Arduino (or another micro controller) when the sinus-wave goes through zero and therefore gives a defined point on that sinus wave.
Opening the Triac for a number of microseconds delay starting from the zero crossing therefore gives a predictable level of dimming.

I have discover two ways so that to dimm a incadence 230V bulb using Arduino. Both uses a triac but the main difference is how arduino should understand the zero cross detection of AC. This method is called AC phase control. It is the method used in many light dimmer and heater and motor power control circuits. For a better understanding we will name the first  way software way and the second  analog way .

Let’s explain in details the operation.

The zero-crossing detection circuit provides a 5v pulse every time the ac signal crosses zero volts. We detect this with the Arduino and leverage interrupts to time the trigger circuit precisely in synchronization with these zero-crossing events. The method for power control is shown in the diagram below.

Once a zero crossing is detected, the triac remains off for a controlled amount of time (t1) . The longer this time is, the less power the ac circuit receives. Once the “off-time”, t1 has elapsed, the microcontroller turns on the triac by applying a voltage to the gate (shown in red). Once turned on, the triac will remain on even after the gate voltage has been removed. It will turn off if the gate voltage is zero the next time the ac wave crosses zero. Because of this, we do not need to take care to turn the triac off when the ac signal crosses zero again. All we need to do is to ensure that the triac gets turned off inside of the period of ½ wave (t3). The duration of the gate pulse (t2) is determined by a minimum requirement of the traic. If this pulse is too short, the traic will not fire Once the second zero crossing occurs, sice there is no voltage on the gate, the triac remains off until triggered again in the next ½ cycle. The net result here is that we “chop” parts of the wave out resulting in lower average power. This is essentially how one accomplishes “PWM” control of an AC wave.

We will be using interrupts and the arduino timer to precisely control the timing of the triac gate. The AC signal is 50 Hz. What this means is that the AC signal crosses zero, reaches peak positive voltage, crosses zero, reaches peak negative voltage and returns to zero 50 times each second. The period (length of time this takes) is 1/50 or 0.02 seconds (20 milliseconds). A half cycle (the time between two zero-crossings) occurs in 10 milliseconds. This is t3 in the figure above. 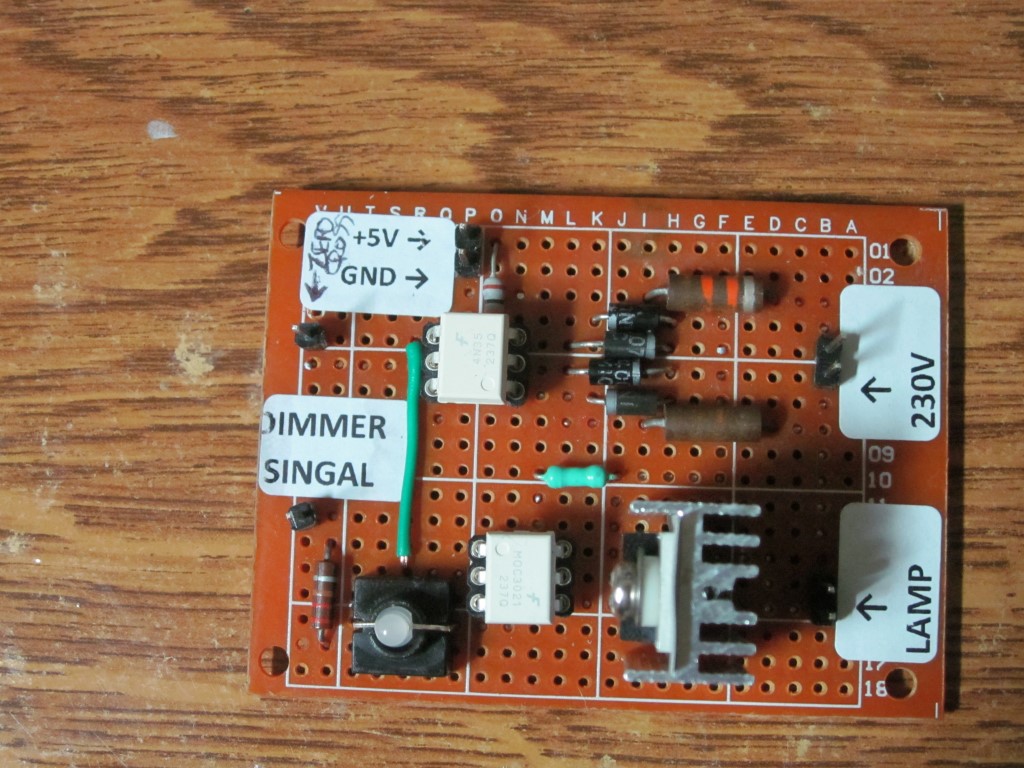 The circuit pictured here does just that. The mains 220Volt voltage is led through two 30k resistors to a bridge rectifier that gives a double phased rectified signal to a 4N25 opto-coupler. The LED in this opto-coupler thus goes low with a frequency of 100Hz and the signal on the collector is going high with a frequency of 100Hz, in line with the sinusoid wave on the mains net. The signal of the 4N25 is fed to an interrupt pin in the Arduino (or other microprocessor). The interrupt routine feeds a signal of a specific length to one of the I/O pins. The I/O pin signal goes back to our circuit and opens the LED and a MOC3021, that triggers the Opto-Thyristor briefly. The LED in series with the MOC3021 indicates if there is any current going through the MOC3021. Mind you though that in dimming operation that light will not be very visible because it is very short lasting. Should you chose to use the triac switch for continuous use, the LED will light up clearly.

You can modify the circuit for controlling motors too. It consists of an additional resistor and capacitor. The gate current is below 15mA. If you are using a less sensitive triac to control the inductive load, reduce the resistor from 2.4kΩ to 1.2kΩ, providing more current to drive the triac and increase the capacitor to 200nF. This snubber circuit is there to protect the triac from the high voltage generated from an inductive load. The feedback may cause some problem for non-inductive load. The small leakage can be significant enough to turn on small load (for example a lamp). 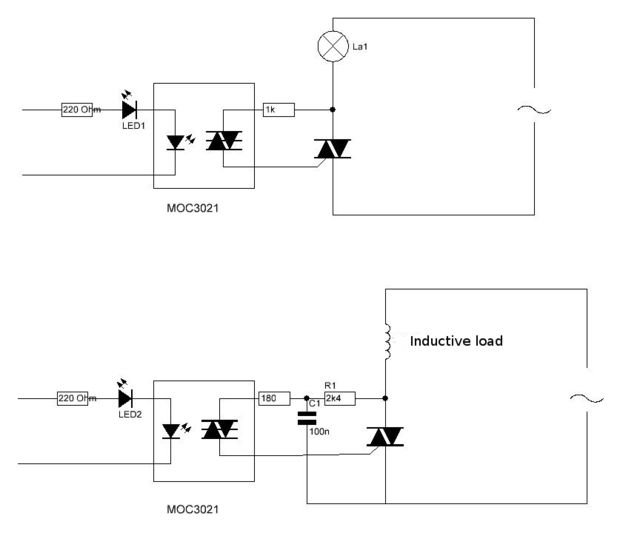 What the software needs to do is to detect the zero crossing, and then wait for a set amount of time on that sinuswave to switch on the TRIAC.

As there are 2 sinuspeaks in a wave that means that after every zero detection there is a 10ms period that we can regulate. This t3 at the diagram.
As we are using TRIACs, what the software needs to do is to wait for the zero point at the sinuscurve, take note of that and then wait a specified amount of time within that 10ms period to send a pulse to the TRIAC.
If it sends that pulse at 5ms, the lamp will only burn at half power.

We will use  an interrupt to tell the program that there was a zero crossing.After the zero crossing is detected the program needs to wait for a specified amount of time and then switch on the TRIAC.

Interrupt driven:
To use an interrupt, first we need to set that up. On the Arduino that is as follows:

What this says is that the interrupt is attached to interrupt 1, it goes to a function called “zero_crosss_int”  and it reacts to a rising flank on the pin.

Interrupt 1 is pin 3 of arduino

In the Zero_cross_int function that the program jumps to after the interrupt  we determine the time we need to wait before firing the TRIAC. We will also add a bit of functionality. We don’t just want one level set that the lamp burns on, we are going to add some functionality to regulate the light level in steps.

What happens here is that the program first calculates the dimtime (=time to wait before the triac is fired)
It then waits that amount of time, subsequently waits that amount of time and fires the Triac. The Triac will switch off again at the following zero crossing, but we are going to already write a low on the TRIAC pin to avoid accidental ignition in the next cycle. We need to wait a bit however to know for sure the TRIAC is on, so we wait 10us
That also is the explanation why I am using 75 rather than 78 for my steptime as 10000-10=75

The only thing then left to do in the main program is to set the level at which we want the lamp to burn:

We can use a timer to determine the amount of time to wait.

As discussed in the previous theoretical page, the software is fairly easy.
If you want to develop your own software all you need to do is:
Wait for the zerocrossing
Wait a specific time between 0 and 9090 microseconds (9090=10.000-10)
switch on yr TRIAC
Wait for about 10us (that is the time you need to make sure the TRIAC is on)
switch off yr TRIAC (in fact, you only remove the triggersignal to the TRIAC, the TRIAC will stay on till the next zerocrossing)

It works as follows:
The interrupt function”zero_crosss_int” gets called every time a zero-crossing is detected, which is 100times/second. It’s only function is to set the time that the Triac is switched on to the value of the variable ‘dimming’
In the main loop of the program the actual value of that variable is set

About the software:  theoretically in the loop you could let variable ‘i’  start from ‘0’. However, since the timing in the interrupt is a bit of an approximation using ‘0’ (fully on)  could screw up the timing a bit. the same goes for 128 (Full off)  though that seems to be less critical. Wether ‘5’ or perhaps ‘1’ is the limit for your set up is a matter of trying, your range may go from e.g. 2 to 126 instead of 0-128.

Have you ever imagine that the same result ,could be achieves using a 555 timer? An yes, 555 is worthy one of the most populated IC! Take a look ..

In other words ,the only difference with the software way ,is just the manner we ‘ll make the microcontroller , to realize the zero cross detection.

The output is then inverted with the transistor T3 and the signal is driven to the P gate of the optocoupler. the optocoupler is used to have complete galvanic isolation between the control circuit and the power circuit. The power circuit uses a BT136 TRIAC to control the load. This TRIAC is capable of driving a 4 amperes load at 600 volts. Feel free to use a more powerful TRIAC.

In the next video you can see ,how i control the AC phase to the incandescence lamp, changing the output  voltage from a power supply to control voltage input to pin 5. What you to the oscilloscope ,is the collector of T3. Buttttt,what happens to triac ,you have to look at the first video at the the of the article!
If you wonder ,if we could control the AC phase of the lamp just only driving with PWM the optocoupler or directly the gate of the triac , the answer is NOOOOO. We must now,when AC signal pass thorough zero!! We have to know that, because immediately after zero cross detection the bulb should be controlled.

Both ways ,works perfect!! If you are familiar with programming and you don’t want too many components on your circuit ,you may follow the first one. If you don’t have programming skills and if you are old fashion electronic ,second way i sthe best. I have to admire second way is more efficient. I have change R9 to 20k and i control voltage input from 0-10V .This is very nice ,because it may be used with dimm able  fluerecent lamps 0-10DC Volts. Plus, it can be easily converted to 0-5V ,so that use it with a microcontroller , using PWM .The but thing  is that it need a transformer  .

Every way you change, good luck

This site uses Akismet to reduce spam. Learn how your comment data is processed.